The Importance of Socializing Your Puppy or Kitten 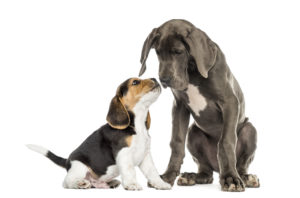 Between the ages of 3-12 weeks in dogs, and 2-7 weeks in cats, young animals go through an important socialization period in which they learn to interact properly with other dogs or cats, interact with humans, and adapt to new environments and stimuli. This socialization window is commonly broken down into two parts, called primary and secondary stages.

The Primary Socialization Stage occurs between 3-6 weeks of age and is when puppies and kittens are still with their mother and littermates. During this stage, they learn proper social play and behavior through interacting with each other, as well as bite/claw inhibition. They can also start to develop tolerance for other species, such as humans and other animals.

The Secondary Socialization Stage occurs between 6-12 weeks and is when animals can start to bond with humans and typically transition into forever homes. It is important to continue introducing puppies and kittens to new stimuli during this stage. Dogs and cats that are socialized early and introduced to a variety of stimuli are more accepting of new experiences and places and tend to have more positive social interactions.

Between the ages of 8-10 weeks, puppies experience a fear period. A traumatic event that happens during this period, such as scary vet visits or negative social interactions, can have a lifelong effect on the dog that may be difficult or even impossible to train out. The trauma of the event can leave a lasting impact on the dog well into adulthood and may result in fear or aggression when presented with the stimuli. There hasn’t been a fear period identified in kittens yet, but scientists believe it is likely that they also experience a fear period.

Well socialized puppies and kittens will typically react positively to new stimuli. Normal behavior is shown through an eagerness and willingness to explore a new environment or stimuli. It may also include an initial startled reaction, but normal behavior includes a recovery and willingness to re-engage with the stimuli. It is abnormal for puppies and kittens to be startled and not recover, freeze, refuse to leave owner/carrier, pant excessively, pace, or vocalize excessively. These are signs of an under socialized or fearful pet and should be addressed with a veterinarian or trainer. Puppies and kittens should not show aggression toward new stimuli, and any aggression displayed needs to be addressed with a Philly veterinarian or veterinary behaviorist.

So how do new pet parents ensure their puppies and kittens get the proper socialization? For kittens, there are programs often called kitten kindergartens that provide socialization with other similar aged kittens, as well as introduction to new stimuli and positive experiences. There are also cat trainers available to help with any socialization or behavior questions owners may have, in addition to your primary veterinarian. Many people think that kittens will raise themselves, due to cats’ independent nature. This is completely false; kittens need daily attention, and positive guidance from humans to develop into well-adjusted cats. Studies show that kittens who are handled for just 5 minutes a day for their first 45 days of their lives were more accepting of strangers and readily approached new stimuli more often than kittens who were not handled regularly.

For puppies, socialization sessions and puppy play groups are a great source of positive interactions. Good socialization sessions will not only introduce pup to other puppies, but to new sights, sounds, people, and play surfaces. Puppy obedience classes are another readily available source of introduction to stimuli, as well as information on ownership, training, and behavioral problems.

Owners are also encouraged to expose their puppies to one new person a day, of differing age, sex, race, clothing style, with and without hats/jackets/umbrellas/canes, etc. Exposing and ensuring positive interactions with as wide a variety of people as possible will ensure your pup has adaptability and confidence with anyone they may meet. Early introduction to children is another key aspect of socialization, as kids act, sound, and present themselves differently than adult humans. Because of their rapid and often erratic movements, children can be more unpredictable and scarier for animals, making positive early interactions essential.

Veterinarians also encourage new pet parents to bring their kittens and puppies in for “Happy Visits” in between regular appointments. During the happy visits, puppies and kittens will receive treats, pets, and praise from their owners and veterinary staff. This creates a positive association with the clinic and staff and will make appointment visits less stressful for your pet over the course of their lifetime.

While early, positive, and consistent socialization is absolutely key in raising a well-rounded and adaptable pet, it isn’t a short-term commitment. Varied interactions and positive association with newly introduced stimuli should continue through the pet’s entire life. For more information about proper socialization for puppies and kittens, you can always contact your veterinarian!